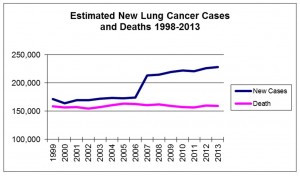 There are two types of lung cancer: non-small cell and small cell.

Most lung cancers do not cause symptoms until the cancer has spread. However, many of the symptoms listed below should be addressed by a doctor immediately:

Currently, there are no tests available that can detect lung cancer at an early stage. Often, the cancer has spread into other areas of the body by the time it is detected. New technology is being researched and developed to better identify lung cancer in its early stages.

If cancer is found, a physician will need to determine the progression of the cancer. This classification, called staging, allows the healthcare provider to properly identify a treatment plan and to determine the prognosis. All cancers are staged on a roman numeral scale, of I-IV (1-4), where the higher stage represents more advanced cancer.

There are many treatment options for lung cancer, including chemotherapy, radiation therapy and surgery.  Each method may be used alone, or in combination.