April is Testicular Cancer Awareness Month: Get the Facts 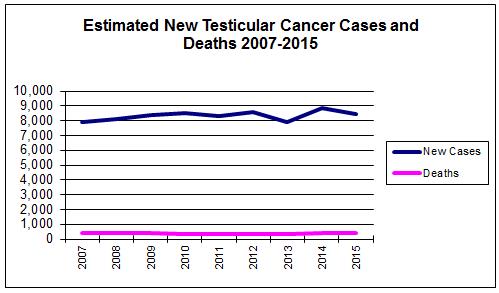 Some of the possible signs and symptoms of testicular cancer include:

Men who experience any of these signs or symptoms should consult their healthcare providers.

Most doctors agree that an exam of a man’s testicles should be part of his general physical exam, and the American Cancer Society (ACS) recommends a testicular exam as part of a routine cancer-related checkup. Regular self-exams of the testicles have not been studied enough to show that the practice lowers the death rate from this cancer. Therefore, the ACS does not recommend regular self-exams for men without testicular cancer risk factors. Some doctors, however think otherwise, and may advise their patients to do monthly self-exams. The ACS has information on how to do testicular self-exam.

If cancer is found, a physician will need to determine the progression of the cancer.  This classification, called staging, allows the healthcare provider to properly identify a treatment plan and to determine the prognosis.  All cancers are staged on a roman numeral scale, of I-IV(1-4), where the higher stage represents more advanced cancer.

If a man shows any of the signs or symptoms of testicular cancer and is suspected to have the disease, his physician may recommend additional testing to confirm diagnosis including:

There are many treatment options for testicular cancer, including chemotherapy, radiation therapy and surgery.  Each method may be used alone, or in combination.