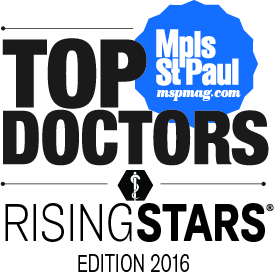 Five Minnesota Oncology doctors are physicians-to-watch in 2016, according to Mpls.St.Paul Magazine.

In the April 2016 issue, the magazine released the inaugural edition of Twin Cities’ Top Doctors—Rising Stars, which recognizes five Minnesota Oncology physicians. To be selected for inclusion the list, the doctors must have been practicing for 10 years or less. Each physician named to the list was chosen by their peers in the field.

Congratulations to the following 2016 Rising Stars from Minnesota Oncology!