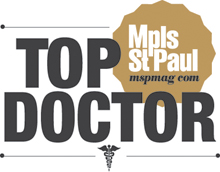 Minnesota Oncology is proud to announce that 19 of our physicians were named “Top Doctors” this year by Mpls. St. Paul Magazine.

The magazine released its 19th annual Top Doctors edition this month. The Top Doctors rankings are determined by a survey sent to 2,500 physicians and 2,500 registered nurses, who indicate which doctors they would go to in pre-selected specialties. Physicians who receive the top 15 percent of the vote in each specialty are featured in Mpls. St. Paul Magazine. Survey participants are randomly selected from the State of Minnesota’s list of licensed physicians and nurses in the 10-county metro area.

Below is a complete list of Minnesota Oncology physicians recognized by Mpls.St.Paul Magazine in 2015.